A very odd thing has started to happen, its hard to explain. Im coping at the moment but my legs feel odd. A strange feeling is creeping up my legs most days now and I am just so exhasuted. I can’t seem to recover from one acitivity before I have to do something else.I guess I will just keep going and see what happens. Maybe I am just imaging it and this is what it’s like to be a parent eh?
………………………
Ok it’s getting worse now so I have finally plucked up the couage to speak to someone professionally and see what they think. Second opionon can’t hurt can it? Maybe they will agree that I just need a few good nights sleep and some rest days and I will be ok……….
Turns out they agreed and it doesn’t sound right so off I am to my G.P for some bloods, may be it’s just low iron levels or something eh?
………………………
I’m getting a bit worried now, my legs don’t feel like mine, they feel wobbly and unsteady. Don’t quite feel like the are connected to me anymore. I am doing my best to keep going though, I don’t want to let everyone down. Plus if I am honest I feel a bit silly saying to people I don’t feel well because my legs feel a bit odd. Makes me sound a bit pathetic surely?
…………………..
Well the G.P. can’t figure it out so I am off to the hospital now to see what they can find. I’m getting worried. I’ve had to start using one of my crutches now that I had from when I was pregnant with Alfie. I just don’t feel safe anymore. I am only using it at home though and trying to work up the courage to use in a shop. What if people judge me because I am young, they might look at me lik I shouldn’t be using it, what if they think I am just lazy or something. Oh god, if they ask me I will look like such a prat, why do you need that…….me erm……my legs just don’t work. Yeah great one Emma.
In case you hadn’t guessed I have low self esteem and worry a lot about what others think. I spent some of my high school life being bullied for various things, I had no filter on my mouth and wasn’t the sharpest knife in the drawer (I’m still not now tbh – see here I go again!!). As a result of the bullying I think it’s just enhanced that side of me where I am so insecure and worry about what people think and how I come accross just so I don’t look like an idiot again giving people ammunition to say nasty things to me. You would think at 33 years old having gone through the things I have done that I would have got over this by now but apparently not lol!!!
………………………
Well not only have I had to give up worrying about using my stick in public I have also had to stay at home now until I’m better. I feel like this illness has got the better of me now in some ways, like it is beating me and I can’t stop it. I came home from work and I was so ill I honestly collapsed on the couch and couldn’t move. Not only could I not move I couldn’t eat or speak, I was sick in a bowl becasue I couldn’t move. All I could be was breathe and blink. I had pushed myself too far now. As tears rolled down my cheeks Alfie came over and tried wiping my tears asking if I was ok. He wanted me to put him to bed but I just couldn’t. It hurt my heart so much that he was shouting for me while Ste put him to bed and I couldn’t do anything. This was not a good day. It was 3 hours before I could even sit up this day. I couldn’t get this bad again. I just couldn’t.
……………………..
Things have got worse now, although they aren’t as bad as that last day in work. Every morning now I wake up and feel like I’ve not slept even though I have. Like my body has been trampled on by a heard of elephants. My legs don’t like like mine and are pretty much unable to move. I can feel that tingling in my arms and legs again. I’m laying on 2 pillows yet I’m still struggling to breathe and I wonder what my limits are today. I’ve a feeling today is a bad day.
Yesterday I wasn’t too bad but I know now I did too much.
I somehow thought it was a great idea to clean the house, cook and play with Alfie. Today I’m paying for it. Today I can barely move. I reach for my phone and as I look through my social media and catch up on things I can hardly move my arm and fingers. Oh god. It’s one of those days.
……………………….
Husband makes me a brew before he goes to work and I sit there wondering how to get through today. It’s my day off with Alfie and I can hardly move. Hubby spoke to me and reply to him took so much energy and I only gave 1 or 2 word answers. Inside I was sobbing. I eventually dragged myself out of bed. Dyspraxia mixed with this my brain could not think at all. Everything was a huge amount of effort and thought process – which apparently today I didn’t have. Great.
I dragged myself to Alfie and a tear slipped down my cheek as he wasn’t co-operating on getting dressed and wanted me to chase him. He came over and put his small arms around me and said “ok Mummy?”. I said I was fine and bribed him with Paw Patrol to get dressed.
……………………… 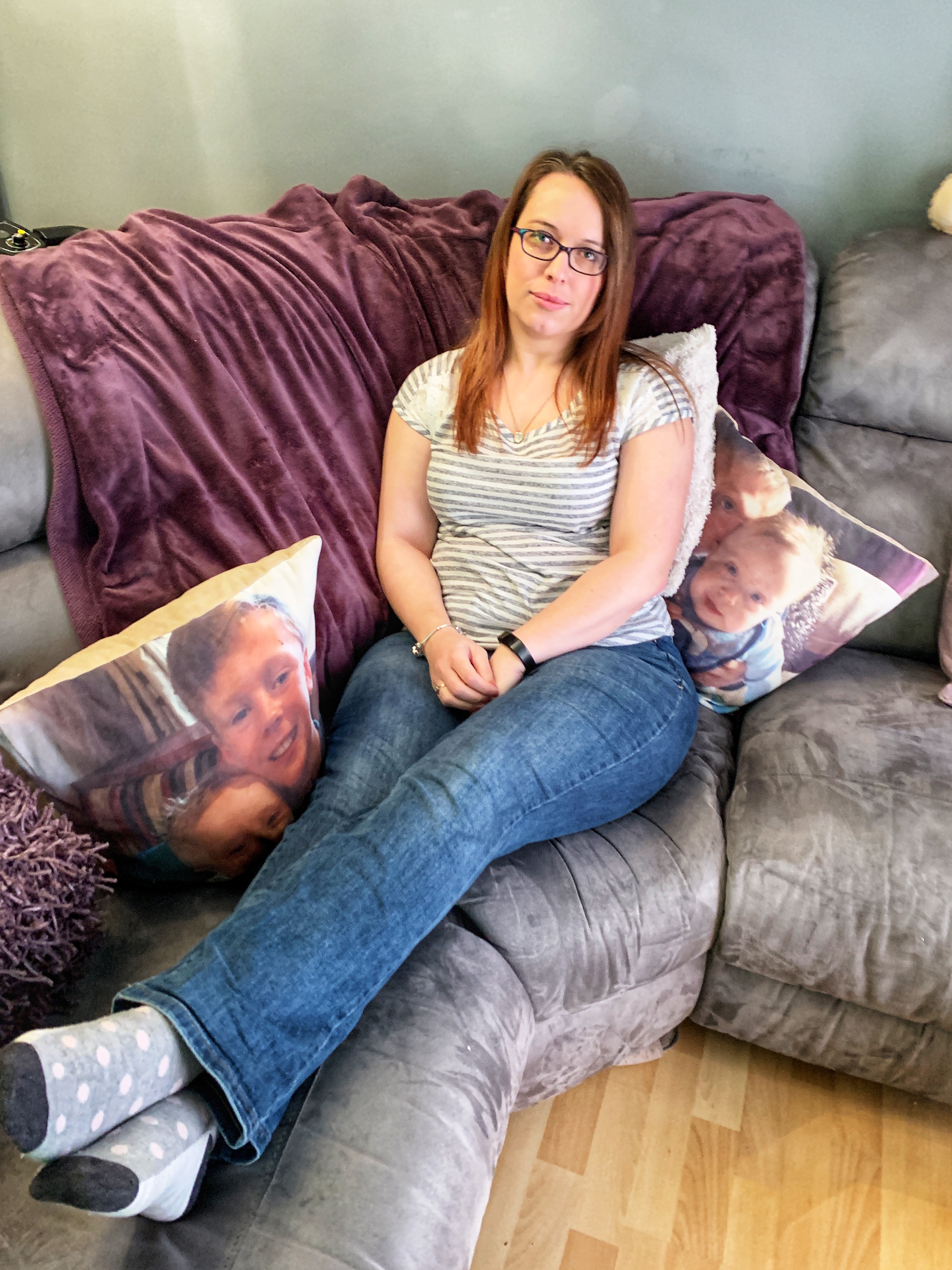 Things have changed since I last wrote. It’s a whole lot worse. I’m on 2 crutches now. I feel useless now and a burden to everyone around me. I used to hate asking for help but now I’m having to learn to ask.
I’ve even had my own Grandma over to help me. She’s 80. Imagine how that makes me feel. My Mum comes over so much to help me look after Alfie and bits around the house. My husband? Well he’s just bloody amazing! He’s so understanding and without him I’d certainly struggle.
I’ve had days where he’s had to dress me, or where he’s had to sit with me while I shower in case I fall. He’s making all our meals, he’s even dried my hair for me some days as I have just not beem up to doing it. I’m pretty sure he didn’t sign up to this when we got married.
………………….
Good god this is never ending, my symptoms are getting worse and I am being moved from Doctor to Doctor, each one testing for everything and not knowing what is wrong with me.
I feel like I am going out of my mind now, may be it’s all in my head? I mean may be it’s not really happening. I’ll just get up and walk and power through, it will b fine surely……….here I go, I will just get up and walk to the kitchen on my own 2 feet……….oh bloody hell no. My legs are shaky, weak and have given way from under neath me. I had to grab the couh quick before I fell. WHAT THE HELL IS WRONG WITH ME! I NEED ANSEWERS NOW! IM GOING INSANE HERE.
………………
This is beyond ridiculous now. I’ve upgraded to part time use of a wheelchair just so that i can actually get out better and enjoy life. I’ll be honest I feel useless now, useless wife, daughter and espeically a useless Mother. A let down. There’s not much I can do without help now, if I don’t get help then I just end up even worse which I don’t want, if I ask for help I feel like a useless burden. I can’t look after my son properly or take him out on my own. I can’t even play with him properly now. Alfie is used to it now but he is frutrated and I wish I could do more for him. William seems sad when he asks me if I will ever be able to walk again. I can see that my family are worried and to be honest so am I now.
I just want someone to help me and beleive me.
……………….
I saw the Professsor today in Rheumatology, I could have yelped with joy. I actually think he understood what I was telling him, he’s the first one too. He gets me. I am finally getting a referral to Neurology. I think I might be getting somewhere now. Two years after I first started noticing a problem.
……………….
I have seen Neurology, she was great. I am having an MRI scan and then being admitted to hospital for therapy on how to walk again. I may not get an answer apparently but at least they are helping me.
………………
That’s it now it’s done.
The diagnosis is made and I have to live with it. It’s nothing serious which is great I know. I get that some people are a lot worse off than me, but right at this moment I am being selfish. I am upset, angry, frustrated, I am everything in one go.
It’s not just one symptom it’s many. It’s forever and it’s unpredictable. It’s everything at once or just one.
One day I could be happily walking through the park, the next day I could be crippled in bed unable to even dress myself or feed myself. Great. Just bloody great.